They appear suddenly, when the Japanese summer reaches its peak, after the tsuyu, the monsoon and before the typhoons. In theory you can find them closer to water spots (lakes, rivers or even mundane urban water tanks) but they are so numerous that they are not limited there and you can see them everywhere, even in places with no plant life, even under the giant screens of Shibuya and Shinjuku. They don’t bother anyone but children hunt them enthusiastically (like they do with all summer insects, anyway), bewildered by their colors and their bold flight patterns. I’m talking about the insects Greeks call “libellules”, the ones for which the English have reserved the more poetic name “dragonflies” and the ones the Japanese call simply, “tombo” (トンボ or 蜻蛉).

Their somehow amusing current name, though, perhaps paints the wrong picture: in various times dragonflies had a variety of names and a strangely protagonistic role in Japanese history and literature: in 720 AD “Nihon Shoki”, the historical epic that narrates the story of Japanese nation’s first years, the first emperor, Jimmu viewed his country from a high spot, said “it looks like two dragonflies mating” and gave it the name “Akitsu Shima” (i.e. “Islands of the Dragonflies”); twenty generations later, twenty-first emperor Yuryaku, impressed by a dragonfly that ate the mosquito that bit him, decided to name the Yoshino plain, near Nara, “Akitsuno” (i.e. “Dragonfly Plain”). One of the first literary works in Japan’s culture is 1oth century’s “Kagero Nikki”, “The Library of the Dragonfly”, while one century later, “the world’s first novel”, “The Tale of Genji”, gives their name to its 52nd chapter –after that, they can be found as “katsu-mushi” (勝虫 or “victory insect”) in bushi armor and samurai sword decorations and as leading actors in countless haiku.

Why? I have yet to find a plausible explanation so I offer a triple one of my own. First, it is their omnipresence, obvious even to casual visitors of Japan during the period they appear. Second, it is their usefulness; their favorite prey is mosquitoes, a particularly problematic creature in a place with so much water and the Japanese are nothing if not utilitarian. And finally, they are a symbol of the end of summer and the beginning of fall; in a culture that puts so much emphasis in the seasons and their interchange, anything indicating this interplay, even if it is only an insect, can’t fail to become the center of an attention that, sometimes, borders on adoration. 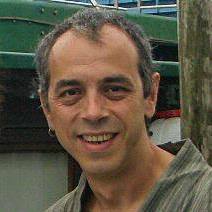 A city with no nights

The tower on the river