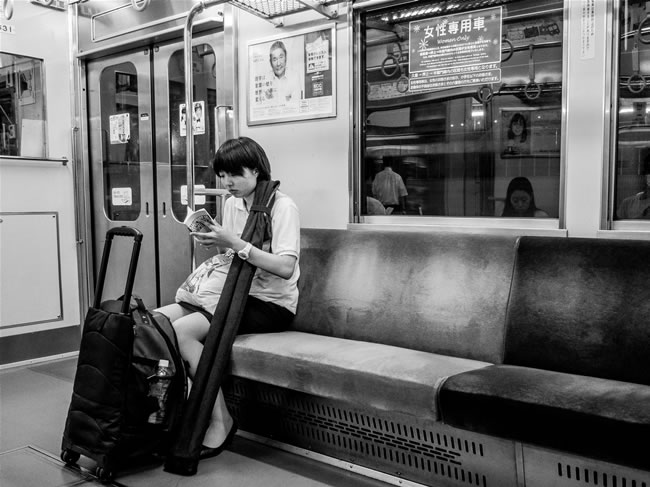 It is one more of those small things that the casual visitor will probably overlook, missing the English explanation in the chaos of ideograms and the bright fuchsia color of the signs in the multicolored panorama of the advertisements. The message is clear, though: during the hours of the early morning rush and late at night, during the last runs of the trains, male passengers are kindly requested to not enter the train cars bearing the particular signs since their use is reserved only for women. And even though the reason for the application of such a policy is not mentioned anywhere, anyone who has experienced what “early morning rush” means and who has seen how drunk the passengers of the last trains are can easily understand it: the particular cars are reserved for women as a measure against gropers or “chikan” (チカン); the systematic ones or those who act this way after the several drinks following their day in the office.

“Is the problem really this big?” asked by many, especially among those who have idealized Japan and its residents. The answer is “obviously, yes”–if it weren’t the measure wouldn’t have come to being. Something that isn’t widely known, though is that it has a story of a century behind it since it was first implemented in 1912: it was one of the least advertised reforms of the Meiji Emperor, probably suggested by the teachers and schoolmasters the enlightened monarch had imported en masse from the West to set up the educational system of new Japan; the goal then was the vulgar intermingling between male and female high school students as dictated by Victorian/Edwardian morals. Since then, it came and went several times until it became permanent after 2000, when the Japanese cities swelled beyond reason and when the crowds moving, especially during morning hours, grew (almost) beyond control.

For outside observers, the most peculiar aspect of the measure (which, incidentally is customary and not legal: no one can force a man to not enter the “pink cars”) is that it is an open admission of infringing behavior and as such, something not consistent with the “introversion of the Japanese society”; at least in theory. Not being a sociologist I can’t have a comprehensive answer to that but my personal opinion is that even though the phenomenon seems at first glance discrepant from the image many have of the Japanese, in reality it is an expression of one of their most obvious characteristics: a problem is swept under the rag as long as the shame from its public acknowledgement is bigger than its actual impact on society; when this balance is reversed and its actual cost outdoes the cost of its admission, then there will be some action. Or at any rate, the pretense of action: according to surveys, pink cars have only marginally reduced in-train groping incidents… And miles to go before I sleep

Everything in a plate

God (and the devil) is in the detail

The aesthetics of the lotus-eaters

Don’t give up Japan