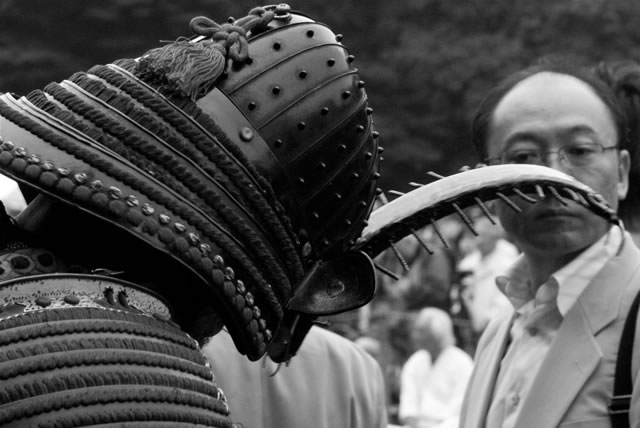 There is something deeply satisfying in training in a classical martial art, the ones called “koryu budo” or “kobudo”. Even though (or precisely because) these schools have almost no connection whatsoever with today’s reality, there is little or no pretence about the acquisition of self defense skills applicable to modern societies and there is only a tangential relation to the much lauded “martial arts philosophy” (since basically these are schools/methods of mostly armed fighting created in a period where people actually went to war), hundreds of people continue studying them and keeping them alive.

One reason might be their inherent exoticism: the weapons are archaic and pretty basic and the training involves dressing in obscure costumes (occasionally even in full body armor), speaking in a language rarely used anymore and learning to behave in situations that history has long passed by. Or maybe it is because the absence of the sporting/competition element brings to the surface some more primal emotions –enjoying the killing/maiming another human being while avoiding get killed or maimed yourself and in the end delighting in the sheer pleasure of being alive.

Koryu training is hard work; in some respects harder than training in modern martial arts/sports. A kendoka at the end of a match is exhausted –in the way an Olympic sprinter is exhausted. And while this is no small feat, it is completely different from the exhaustion felt at the end of the performance of a set of forms between two koryu practitioners; in this case and provided that the school still trains the way it is supposed to train and not in some theatrical, fossilized and fantasy-fulfilling way (like many do even in Japan), the final bow at the end of the set means: “We killed each other but we are still alive; here’s to living one more day”.

There’s a deep duality in all human beings: the need for things to change and the need for them to remain as they are and being part of a bugei ryuha, a classical martial school is a way to balance these two. Training itself is embracing change but doing it as part of a lineage that started in the Sengoku Jidai, the age of civil wars is maintaining tradition –which itself is also change, since it has been flowing constantly through the centuries.

The night of the masks

Eye in the sky