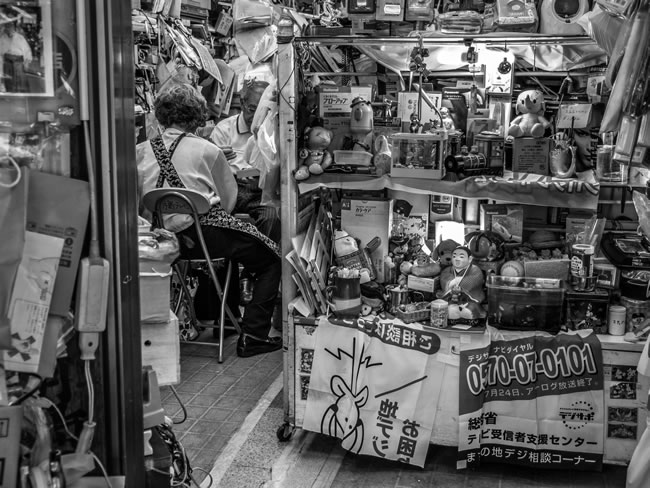 Text and photo by Grigoris A. Miliaresis

Books. Magazines. Newspapers. Advertising flyers. Information flyers from the City, the neighborhood, associations and non-profit organizations. Coupons and vouchers. Reciprocal gifts from marriages, funerals and souvenirs from trips in the country and abroad. Boxes small, big, even smaller and even bigger, figurines, dolls, decorations, fans, pens and papers, notebooks, Buddhist and Shintoistic talismans, paper and plastic bags, wrapping papers, envelopes –for letters, money and special occasions- remote controls, sweet snacks, savory snacks, small plates, cups, teapots, chopsticks, coasters and place mats, pictures, calendars, room thermometers, pillows, gadgets old and new, useful or useless, a box with emergency items (plastic tea bottles, flashlight, cup-ramen) for times of natural disasters, clothes, cords, chargers. Everything in plural, everything in the same 100-150 square feet and everything piled on the floor or in overflowing closets fixed on the walls like the furniture in psychiatric hospitals and prisons.

Japan’s total area is about the size of Montana (roughly 146,000 square miles). But the actual habitable part is just 25% of that, i.e. something about the size of Maine, and its population is about 1/3 of the population of the US. In other words, it’s the population of California, Texas, New York, Florida, Illinois and Pennsylvania combined and living together –in Maine. And even though, as invariably happens in developed industrial nations, its population is unevenly distributed, the need for vital space almost everywhere is so powerful that you feel you can touch it; in an average Japanese home you can actually touch it because everything is there, in front of you, behind you or beside you, seemingly just laid out wherever there in even the smallest available room and with few clearings that allow people to sit, read or write, watch TV, eat or rest. There is a reason the Japanese rarely invite people to their home: the majority of Japanese homes barely contain their owners and their stuff.

Although the first impression one gets from a Japanese home is that its resident is a hoarder, what really happens is much more normal, at least for the standards of a society with such a massive problem of lack of space: people live their present submerged in their past –every object around us has its history and reflects a moment of our history- and this unavoidably affects them. Perhaps this is the reason (or at least another reason) for one of the most interesting aspects of the Japanese psyche, the acceptance of the ephemeral and the reconciliation with the idea that everything has a birth, a life and a death and is certainly the reason for the Japanese’s futile obsession with tidiness and cleanliness: when you must do everything in the same, minimal space it is inevitable to want to keep it as orderly and as clean as possible. And it’s equally unavoidable you will fail: entropy is a tough opponent. Birth of a legend